I have finally had time to do more modeling work regarding a topic near and dear to my heart. “Nasal Air Conditioning”.  These are the actual sad results of what happened to me after trusting two ENT doctors in Seattle to “trim a little tissue” in 2006 and 2007. ENS is a multifaceted issue but one of them is that ENS victims simply cannot process air. Let’s explore why. It is known that the lungs need the air we breathe humidified in order for good oxygen transfer. The nose accomplishes this by heating the air we breathe to just under normal body temperature and humidifying it to a level of 98% humidity by the time air hits the throat. It is a simple fact of engineering that a larger surface area of wet mucosa tissue will more quickly and more evenly heat and humidify the air we breathe in one quick pass as compared to a surgically altered nose with far less surface area.  98% is “normal” so in engineering terms it is our “specification”. Now let’s see the actual results of overly aggressive nasal surgeries on actual performance.

I modeled the amount of heat transferred to air being passed through the following models:

I will go light on graphs in this post as you can easily see the results for yourself by simply looking at the color coded temperature scales to the left of each image. Even Dr. Richard Douglass from Aukland New Zealand can see this one 🙂 The material I chose again for modeling is silicone rubber as I don’t see “human Nasal Mucosa Flesh” in my Autodesk drop down menu. The flow rate on all is 5 liters/minute. (restful breathing) I applied a boundary condition of 20C for the incoming air temp on all models which is 68F or room temperature. I also applied a initial condition of 37C to the nose material which is human body temperature (98.6F).

We can now just cut to the chase and look at how warm the air becomes just prior to hitting the back of the throat. The full set of images is at the end of this post. 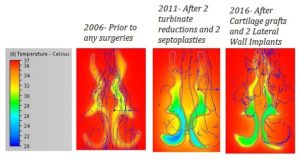 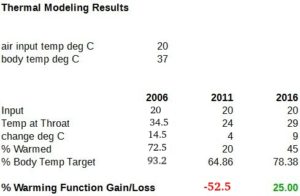 In the 2006 model (prior to any surgeries) the air at the throat was warmed from 20C to 34.5C. That is (14.5 degrees) for a 72.5% increase.  After 2 destructive surgeries it was warmed from 20C to only 24C for a paltry 20% increase. That is a LOSS of -52.5% from original functionality!!! There is also a large area of unfiltered and unprocessed cool air all the way back at the throat. I remember feeling air hitting the back of my throat in 2008 and thought is was odd. There were MANY hints that I had ENS but the thought didn’t enter my mind as I didn’t know what ENS even was. This is not ‘imaginary” as Dr, Douglas suggests, whatever your mental state, I can assure you that you are breathing cold dry unfiltered air. Modeling software doesn’t care about feelings or depression it spits out results. Anyone with CT scans like this is destroyed plain and simple. The 2017 model (after implants and many injections) is 29C at the throat which is now warmed by 45%. That is a 25% GAIN in heating capacity.

I felt every bit of that change too after getting implants.and I owe a sincere  debt of gratitude to Dr. Nayak at Stanford and his team for standing over me (for 4 hours!!!) gently massaging my beaten up dried tissue off of the lateral walls. He said that it was “tight as a drum” and if it ripped that he wouldn’t be able to get the material in. I can’t even imagine that level of dedication and painstaking work. It ended at 8 PM. I plan to cover more results from my current state in the future.

Below I will show the angled side views which show the MOST OPEN center slices of airway. You will see the extreme changes where before any surgeries, the deep blue color area (20C) room air is quickly conditioned in the FIRST THIRD of the nose! After the first destructive surgery you see blue unprocessed air pouring in and getting much farther into the nose. After the second destructive surgery, there is almost no warming/conditioning at all. You see blue areas almost all the way through. Maybe many people are couch potatoes and don’t notice this as much. If they did this to an athlete, I am sure they would be finished. I used to hike a lot and I was SLAMMED on my first hike after my first surgery like I walked into a glass wall. Many ENS victims in the Facebook support group “were” active people, runners/sports and are now unable to exercise. This is partly why!

One EASY take-away lesson from the images below is that the sooner air hits narrowing heated tissue the faster it becomes warm. You can see from the first few images how the narrower upper nose gap rapidly warms the air. Also “painfully” obvious in the 2011 over opened nose is the large blue areas of unprocessed air going right through the center of the nose like a drill. Another easy take-away is that inspired air does cool the nose to some degree. You can see the tissue (that should be solid red 37C) being cooled by the air. This model is set for a “constant” flow, not a transition but our tissue IS cooled  during inhalation. Usually most of the work of heating begins right up front in the Anterior nose.

Here is a wonderful study that I highly recommend reading: https://www.ncbi.nlm.nih.gov/pmc/articles/PMC3199825/

“In summary, there is a significant increase in air temperature and humidity within the anterior nasal segment at the nasal valve level during inspiration. The temperature of the inhaled air increases almost synchronously to intranasal humidity. The temperature gradient between nasal mucosal surface and air is an elementary prerequisite for an efficient heat and moisture exchange. Additionally, the nasal valve area, including the anterior head of the inferior turbinate, plays a crucial role in nasal air conditioning”

So it is nauseating for me to read studies like this where these effects are well known yet I have had my anterior heads cut off. Amputating the “heads” of the inferior turbinates is just a REALLY bad idea. It’s actually retarded…… I know that is a “politically incorrect” label to use these days but developmentally impaired people are “disabled”. Doctors, who who go through college carving up cadavers, reading medical studies and memorizing medical jargon that then go out into thew world and do things like this have “RETARDED THINKING”. 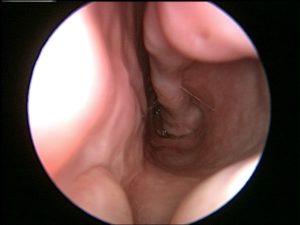 I tried to model humidification but was unable to do so. When I tried to make the model tissue “wet” (salt water) the model would not run as it considers both air and water a “fluid” and it complained about 2 fluids in contact with each other.

We do know from the above linked article that “Humidity increases “synchronously” with temperature” so then we now know that humidification capacity would be hindered in roughly the same proportions as my thermal results. So life may get even harder yet because as the same study points out, normal aging also degrades the inner nose. This happened to me when I was 40 and I am 51 now. Judging by what I feel right now, old age will not be graceful.

“Like other body parts and organs, the nose changes as the body ages. Elderly patients frequently complain about the feeling of a dry nose and recurrent crusting probably due to age-related degenerative effects of the nasal mucosa.”

My symptoms prior to getting implants were: Very disturbed/fractured sleep. (I was jolted awake every 2 hours with panic spikes, my nose was dry and in pain and I was grinding my teeth. Upon awakening I was very weak. I had anxiety day and night,  my muscles were tense and engaged all the time to the point where all muscles were extremely weak. I had nerve pains and sickening mental disturbances of suffocation that made it impossible to concentrate at work. The dryness required saline spraying every 10-15 minutes all day long to avoid crusting and pain. If I went out without a saline sprayer I would be in even worse pain after 15-20 minutes. My heart rate would fluctuate upward sometimes while just sitting there like my whole control system was going haywire. My heart was actually tired. I could feel it. I couldn’t exert myself at all. I was basically in a death spiral. I couldn’t sleep and my nose burned all the time. I was finding little enjoyment anywhere in life at all and I was close to losing my job.

Needless to say I am sick of hearing about any ENT doctor that still denies “even the existence” of ENS. That is like telling a Jew that the Holocaust didn’t happen. While they can debate how “rare” it is, there are forums and groups FULL of victims who were totally healthy prior to nasal surgeries that suddenly became tortured, crippled and physically out of breath. One can read many “official” medical studies and see that there are indeed hard numbers on what is “normal” for flow and resistance yet some of the surgeries that occur place patients well beyond known normal limits. Nerve damage aside (which does happen) many surgeries just don’t make mechanical sense.

The fact that the Association of Rhinologists. (in year 2017) is still hosting debates that have to even question the existence of ENS tells me.that doctors as a group have a long way to go toward admitting to and then understanding and preventing ENS. When my company has an issue with a system we sell, we don’t say “gee” that problem doesn’t exist, you must just be imagining it. Or “That rarely happens, we wish we could help you but you are on your own”.  We take responsibility and fix it.

ALL of the results posted on my site are based on physics, reality and actual sleep measurements. I would compare nasal “Climatization” to a car with a bad radiator. It runs fine in the winter with cooler air, but in the summer, it over heats. I basically can’t process air. In dry summer heat or dry winter indoor heating I feel worse.There are physical realities that simply exist. Radical nasal surgeries disrupt and destroy the functions of a nose. While some argue that ENS is rare, and most may survive radical surgeries, it is still obviously NOT the best thing for them and this is the proof. I have yet to see a study of Turbinectomies on people who ARE actually physically active. Show me a basketball player or soccer player who runs back and forth just the same after having this done. 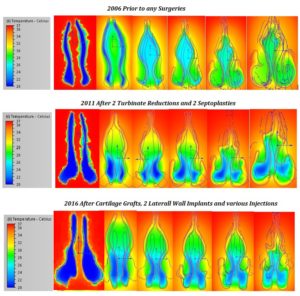 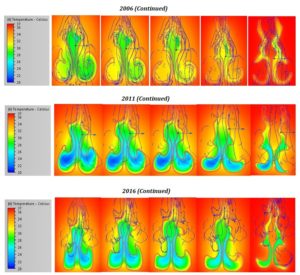