A functioning nasal valve is critical to a healthy functioning nose. The septum plays a huge role in compressing the fluid (air) against the large soft radius turbinate heads. The rounded bottom of the septum matches the soft radius of the turbinate head. This controlled gap is what evenly distributes the air between the upper, middle and lower nose. Over opening both the heads and the septum at the same time destroys the nasal valve completely. I ran a test below in which I isolated and displayed what the output looks like just after the nasal valve below. My velocity data charts show a big drop off in anterior velocity in the upper and middle nose as a direct result of the amputation of the inferior turbinate heads and two separate Septoplasties which took the septum from 5.4-6.8mm wide (pre-surgery) to 3.67-5.85mm (after the first surgery) and finally 1.76 to 2.28mm (after the second) which removed all of my cartilage.

“The pattern of this normal airflow largely de­pends on the function of the nasal valve, the primary airway re­sistor. The location of nasal valve has been described to occur at the entrance of the piriform aperture, the region just anterior to the tip of the inferior turbinate [32]. It is normally the narrowest region of the nasal passage, and, therefore, is a critically impor­tant functional region for nasal airflow [32,33]. In a healthy nose the nasal valve creates a zone of highly turbulent kinetic energy, high velocity, high negative pressure, and high wall shear stress (Figs. 2, 3). The nasal valve also changes the direction of the in­spiratory air stream from the vestibule, and directs the bulk of airflow around the inferior turbinate. The aerodynamics of air­flow changes significantly from a relatively laminar profile at the vestibule, to highly turbulent anterior to the head of the inferior turbinate. This is critical to facilitating mucosal contact for heat­ing/cooling, humidification, and filtration of inspired air.”

With that in mind, let’s take a look at some 3D model slices at the valve area. 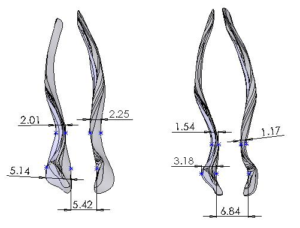 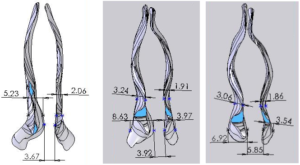 2011 after 2 bilateral turbinate reductions and 2 septoplasties) 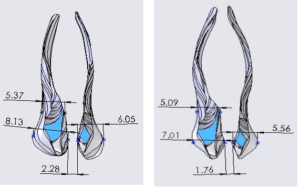 Yes that blue space showing through the models is the back of my throat.

After learning of the importance of the nasal valve (above) I was curious what the output of just the nasal valve would look like in isolation and with modeling it was not too hard to find out. For these tests I simply cut the 3D models right after the head gap area and displayed the traces as they propagate into dead air space after passing only the first anterior 10mm of the models below. For comparison again let’s start with the left side which was a decent representation for “Normal” 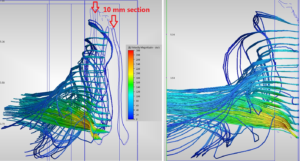 You can clearly see the simple concept that a narrower slit evenly compresses and distributes the air while an over opened head and septum gap allows most of the air to pass straight into the lower cavity area at very low velocities. This is a CRUCIAL input to the “system”. In engineering there is the old saying that “Garbage IN, yields Garbage OUT”. This nasal valve is garbage. With a totally destroyed nasal valve, anterior velocities will remain low regardless of implanting the cavity area. Getting this area reconstructed and filled in by a really good doctor was the single biggest improvement in my quality of life. There is a simple efficiency that pulling with the lungs creates with a proper gap at the valve where a pressure sets up instantly and you can feel work being done by your nose. This effects exhaling as well. You feel feedback that it is OK to draw a breath and to keep pulling in against something. Your brain feels this as well and it IS all connected. It is like bookmarks so you know where you are while you breathe. When you sleep, your brain doesn’t know where you are and you stop breathing. It’s called Central sleep apnea. When the gap was excessive, I felt nothing. It is like breathing through a snorkel tube or trying to blow up an air mattress. Breathing feels futile and nonexistent.

We can now view the nose as a “system” having discreet components. The Nares are basically a plenum which collect and start to funnel the air into the nose in laminar form. The heads rapidly compress, speed up and distribute the now turbulent air into the upper, middle and lower nose. The long cavity section allows this evenly distributed air to contact a long section of wet turbinate tissue which rapidly warms and humidifies the air for proper oxygen/gas transfer in the lungs. Each of these components are important and all serve a function. All deserve special care during surgery not to destroy any one component or the system as a whole.