I am sure many people wonder: “if one surgery was bad, why get another surgery”? Paradoxic Obsruction is the feeling that you are obstructed when there is actually no mechanical blockage inside your nose. Your cavities may be 10mm wide empty holes but feel obstructed. This is a rather important topic and it points to the inability of doctors and even the patients themselves to properly assess a “surgically altered” nose or accurately describe it’s symptoms. Most early ENS symptoms often mimic normal Pre-Op complaints except that now “obstruction” is a mixture of both paradoxic obstruction and real obstruction due to swelling related to dryness and irritation and loss of nerve sensation.

“The diagnosis is often complicated because it is common to find that the remaining tissues are hypertrophied (in response to the dryness and constant aggravation of over-turbulent air currents).” De-Groot 2003

This often tragically leads people to seek a second opinion and surgery is often the fix that a surgeon sells. Many ENS victims had multiple surgeries. I foolishly agreed to a second surgery by a doctor who was convinced that my now URGENT problem was “a little farther back” and that he would just “trim a little more tissue farther back”. I learned years later was that he did a VERY aggressive septoplasty.

My CFD results (below) clearly show unguided disorganized turbulent flow patterns as the nose becomes more and more opened. These patterns are not conducive to a “normal” flow as air flow through these regions swirl around in the equivalent of an “eddy” in water flowing in a stream. Areas of recirculation are basically pockets of dead air space and these swirling patterns are drying for the areas affected. This may very well explain paradoxic obstruction. While many doctors look at the total resistance and flow and see no problems, I feel that creating pockets of dead space is part of what causes paradoxic obstruction.

During the time I have been studying my nasal CFD analysis work, I have been observing water currents in a nearby stream and have been finding parallels in nature. After seeing my CFD results with traces flowing backwards I went looking for the answer that was right under the same bridge that I walked over and looked at every day. Water flowed backwards after passing a rock and I had never noticed it before. I took a picture (below) 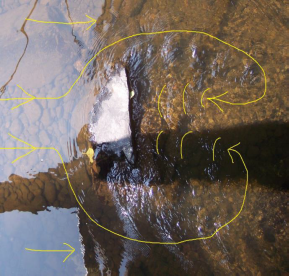 “Turbulence occurs when obstacles, such as rocks or a sudden narrowing of the river channel, obstruct the current’s flow. Obstacles force too much water into too little space, so the water runs faster and laminar sheets break into individual ribbons of current. Then things get really complicated. If water runs into a boulder, (like the head of a turbinate) a turbulent zone is created where the water and rock collide. The current runs faster around the boulder’s edges, but behind the rock, it forms an area of backward-flowing water called an eddy.” You can see a movie of this in action here: http://ffden-2.phys.uaf.edu/104_2012_web_projects/Shallyn_Farrington/site/physicsofwhitewaterrafting/fluid-dynamics/index.html

Now if I placed curved boards behind the rock on either outer side, the flow would be fast, smoothly guided and efficient but in the absence of a guiding structure the water sees the change in pressure behind the rock (turbinate head) and turns around to fill it just like in an over opened nasal cavity. Finally, the issue of actual obstruction due to the “Wide Cavity Empty Nose Syndrome” was answered by my modeling, my prior and current symptoms and backed up by nature as well. The link above also shows a river with laminar smooth flow, turbulent flow, then unguided turbulent chaotic backwards flow all of which are very similar to how the nose works. It comes in laminar, turns turbulent at the heads and if not properly guided becomes chaotic. Wexler’s study had this to say regarding resistance created by turbulence: “Whereas in purely laminar flow the resistance increases in proportion to velocity, with turbulent flow the resistance increases approximately as the square of velocity”

Here are examples that show how each surgery made this issue of chaotic turbulent unguided flow worse:

Prior to finally getting help, 2011 and 2012 were the worst and hardest years of my life. I felt exactly like these pictures above look. Many traces result in turbulent re-circulation patterns. I was hardly sleeping at all. I was experiencing anxiety attacks so severe that I had to lay on the ground several times per day, even at work. I was out of breath with almost any activity. Mental feelings of suffocation alarm were near constant. Even bringing a towel to my face or a glass of water to my mouth could sometimes unconsciously provoke deep hidden primeval fears of suffocation when least expecting it. Nerve pains and dryness were beginning to be unbearable. Each breath brought a very unpleasant signal in my brain like a mild electrical shock where something was supposed to be happening but wasn’t. I had intense headaches originating from this same area. There was a longing in my brain for a reward for the simple act of breathing and there was none. These symptoms varied throughout the day and were most often worse late in the day as fatigue intensified. The cure for most things is of course rest but the sardonic irony of ENS is that you can’t sleep and there is no rest from it day or night.