What if I had gotten the “conservative” Submucosal Resection (SMR) that I had agreed to? With modeling we can find out! I modeled an SMR surgery on the right side only, which was all that was needed. Below are 3D model image slices that show the right side only, (right before Vs. the right side after a modeled SMR) I used a very conservative radius reduction starting at the heads and then “internally shrank” the lower 1/3 while retaining the basic shape and NOT cutting cross sectional areas off.

Images of model slices of right side pre-surgery Vs. right side modeled SMR surgery (below) 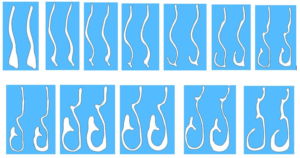 CFD results for modeled SMR surgery right side only

Images: CFD results for modeled Sub-Mucosa resection (each numbered image is right side pre-surgery vs right side SMR) 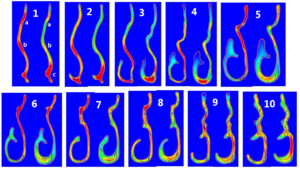 In the 2D CFD images (above), in image #1, at points “a” and “b”, we can already see how even a conservative SMR has already redistributed the air from the upper nose to the lower nose. Anything beyond this is a massive and destructive redesign of a natural structure that has a mechanical purpose. Much more air has already been redistributed to point “c”. I have also modeled Septoplasties and at this critical point “c”, my work shows how important the lower septum truly is. Flattening the septum at point “c” guarantees that most of the air will start off and stay below the inferior turbinate no matter what. I feel that doing a septoplasty AND turbinate reduction is simply too much. It is also a further unneeded risk for injury to nerve endings in 2 structures rather than one. Image#2 shows the peak velocity area above the inferior turbinate has also now shifted to the area below the turbinate. By image #4, the air path that was distributed along the upper part of the inferior turbinate at 200cm/second is now running completely under it.

A higher negative pressure induces wider opening of distal bronchioles which is necessary for proper alveolar gas exchange in the lungs. Nasal resistance during expiration also helps maintain lung volume. The negative pressure drop I had prior to any surgeries in the chart below was -40 Pa (Pascals). The right side was indeed obstructed but the first surgery alone dropped it down to -2.94 Pa (close to zero) for a 92% reduction in negative pressure!!! The second surgery as if possible, reduced it to 2.34 Pa. My modeled SMR produced a far less aggressive drop of -22 Pa for a roughly 50% decrease in negative pressure. After 2 nasal surgeries there was almost NO nasal resistance to speak of. 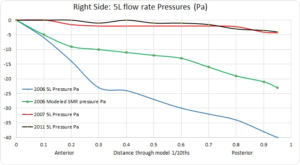 Doctors also use the following scale to determine a value for your overall resistance. According to the following, my right side was originally above the 0.3 upper limit mentioned below indicating obstruction. However, my modeled SMR results are squarely in the “normal” range while my actual “surgeries” are far below even the 0.15 minimum mentioned. I am scraping ZERO resistance.

From the pressure readings we can calculate the nasal resistance by dividing the pressure (Pa) by the flow rate.  (5 liters/min=83.33 cubic centimeters per second). 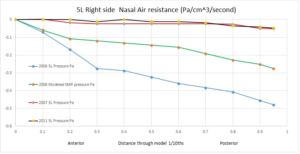 The velocity results of my conservatively modeled SMR (below) fall squarely into the normal middle nose range of 150cm/second matching Wexler’s study. This also now matches my left side pre-surgery results. Also of note is that that the distribution for the SMR is natural in that it favors the upper and middle nose.  All that was ever needed was a conservative SMR on one side, yet 2 doctors both felt the need for two aggressive bilateral turbinate reductions AND 2 septoplasties!

My Conclusion: This appears to be a perfect surgery in that it alleviated physical obstruction for the right side and did it in a manner that evenly distributed the air in all areas of the nose to share the load of filtering heating and humidifying the inspired air AND left mucosa tissue and nerves in place to interact with the air stream. This is why the SMR technique has the best known results, and is the preferred surgery as stated by Moore/Kern, Pasquali and others. Sub-total and Total turbinectomy procedures run far higher risks and anyone still performing these should warn their patients of these risks and gain proper informed consent prior to changing anyone else’s life for the worse.

Other published opinions regarding a Sub Mucosa Resection:

Passali et al 2003: “Considering the actual international state of the art of turbinate surgery and according to data provided by the present 6 year follow up study we believe that the technique nearest to the above mentioned ideal is the submucosal resection. Undoubtedly the elevation of the mucoperiosteal flap requires a higher level of technical ability than a mere full thickness excission, for this reason, many surgeons prefer turbinectomy to SMR, sacrificing in this way, the possibility of correctly restoring nasal physiology” “In conclusion considering that as discussed above, the quality of life of the patients affected by chronic nasal obstruction seems to be related more to the restoration of nasal physiology than to a simple increase in nasal volume, we recommend, inspite of the greater surgical skill required submucosal resection as the first choice technique for nasal obstruction.”

(To me this simply means that too many surgeons are either unskilled or lazy and it is simply easier and faster for them to snip turbinates off with scissors than it is to work under and inside the turbinate to preserve mucosa tissue even though there is no going back for the patient.)

Moore/Kern: “At the Mayo clinic Moore and Kern noted that 214 of 242 cases of confirmed Atrophic Rhinitis, 166 had developed secondary to nasal surgery and 95% of those had undergone a Turbinectomy. Crusting of the lateral wall occurred in all patients. All Turbinate reduction techniques showed marked impairment of nasal function over the first 3 years. At 6 years follow up only the submucosa resection regenerated these functions to approximately normal levels. Crusting was reported in 8% of SMRs and 76% of patients with turbinectomy. “We advocate only the SMR as a turbinate and mucosa preserving approach which preserves physiological function.”

E. Huizing 2002: “Unfortunately, a wide nasal cavity syndrome due to reduction or resection of the inferior turbinate (and/or middle turbinate) is still frequently seen. When caused by (subtotal) turbinectomy, it can hardly be considered a complication. In our opinion, it is a “nasal crime”. This iatrogenic condition can easily be avoided by reducing a hypertrophic turbinate using one of the intraturbinal function-preserving techniques (see p. 279).”

Wang, De Yun, Heow Peuh Lee, and Bruce R. Gordon. 2012 “Of the three simulated surgical techniques, wall shear stress and intranasal pressures achieved near-normal levels after resection of the lower third, but not in the other two surgical models. The airflow patterns and pressures obtained following radical turbinate resection were comparable to a previously published CFD study on a patient suffering with debilitating atrophic rhinitis, where the airstreams were disorganized and turbulent, resulting in minimal contact with the remaining nasal mucosa [37]. Furthermore, insufficient warming of inspired air was also demonstrated [8].